Important Information: As an Amazon Associate I earn from qualifying purchases. I may also earn money or products from the companies mentioned in this post. See Privacy Policy, Disclaimer Page and Terms of Use for more information.

This Spicy Lentil Dahl recipe is one of my absolute favorites.  I was first served this homemade version when at the home of a friend born in India.  I loved it so much he volunteered to come over to my house and teach me how to make it.  I eagerly accepted and we invited he and his wife over a few weeks later.

The first thing we did was go to a local Indian grocery store and purchase the asafoetida powder.  Although it smells awful raw, after it’s cooked it really makes this spicy lentil dahl recipe pop.  But be sure to just add a pinch.

I’ve seen a lot of other dahl recipes include vegetables like onions or tomoatoes.  The fact that this one does not makes it very simple for anyone doing Bright Line Eating®.  Just use the dahl for your protein serving.

I’ll sometimes saute some spinach separately  and then mix it in with the dahl after I’ve weighed out my spinach.  Typically I would only add an ounce or two of spinach to the dahl and then use the rest of my vegetable portion for something else.

Also, if you are in the maintenance phase, you could mix this with a grain serving of brown rice or quinoa. 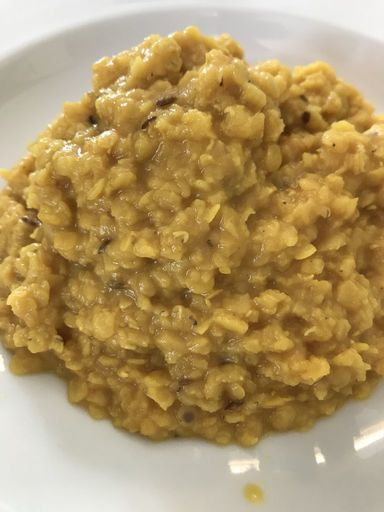 THIS IS HOW I FOOD JOURNAL:

Why Not Start Your Own Blog?